If you didn’t hear this past Sunday’s teaching – you can catch it HERE, by the way – this is what it was all about.

It might sound a bit cliché, or like a slogan you hear on a banking commercial.  But it’s actually a phrase that points to something far deeper than that for Jesus followers.  It describes a value, that as a church, we want to shape all of our decisions, behaviours, and interactions.  And the reason this value is so important – especially in our time – is because it points to Jesus.  To all He’s done.  To all He’s doing.  And to what He cares most about.

Take two minutes to sit in silence, slow down your breathing, and become aware that the Spirit of God is with you in this moment.

The Apostle Paul unpacked this value to a community of Jesus followers that, up till then anyway, had been very far apart from one another.  Some had come from a Jewish background.  Others, from a non-Jewish (i.e. Gentile) background.  And while formerly, they saw themselves as enemies and strangers to one another, Paul wanted them to understand that their new “togetherness” in Christ is one of the most powerful evidences of Jesus’ work, and one of the greatest reasons we call it Good News!

And here is where it starts: In Jesus, we’ve ALL been brought close to God.

At the time this letter was penned, this thought would have blown away the Jewish mindset.  After all, they were the ones close to God.  They were the citizens of God’s Kingdom.  They were his children.  Everyone else – the Gentiles – were foreigners and enemies.  But now, Paul says, “in Christ Jesus you [Gentiles] who once were far away have been brought near by the blood of Christ.”

In Christ, God made foreigners his friends.

If it was hard for Jews and Gentiles to reconcile their differences, Paul forces the point home: If you think you were far from each other – just think about how far you were from God.  But in Christ, He’s closed the gap.  He’s brought you home.  He’s made you one of His own.

And if we’ve ALL been made part of God’s family, then it means we’re in it together.

Take a moment and reflect on your own story.  What has Jesus done in your life to bring you near to God?  How has he graciously closed the gap?  Where might you be (or who might you be) right now if Jesus were not a part of your life?

Write a prayer of gratitude, thanking God for bringing you near to Him through Jesus.

Now reflect on someone you know who may be walking far from God right now.  Pray this passage over that person – that God would do that same miraculous work of bringing them near to Him as well.

Take two minutes to sit in silence, slow down your breathing, and become aware that the Spirit of God is with you in this moment.

Several years ago, while I was serving as a youth pastor,  I took a group of youth to a paintball arena.  Everyone was excited for a great day as we arrived at the venue and started putting on our equipment.  While we were there I got to chatting with one of the employees, and after observing our group for a while, he asked me, “So… like…  who are you guys?” I told him that we were a youth group from a church in the city.  But he had seemed pretty baffled when he asked the question, so I said: “That’s an interesting question, what made you ask it?”  And I remember his response clear as day, though it was many years ago.  He said, “You’re just all so…  different.”

And that made me smile.

Our group – maybe 20 of us – was made up of young and old, male and female, and many different skin colours.  We were so diverse that it actually confused this paintball employee.  Maybe he was used to seeing different groups.  But not any single group that was so different.

And that is a beautiful picture of the Church.

A community made up of people from every nation and language; every age and stage; rich and poor; every colour and shade.

Don’t underestimate the miraculous power of Jesus to make peace where there is hostility.

Is there a group or a person with whom you feel a certain amount of hostility (other words that Paul uses are “barrier”, “dividing wall”, “being far away”) toward?  What is behind those feelings?  Share your reflections with God in prayer.

Read this passage again in light of the relationship you’ve just been reflecting God.  Ask God for the miraculous possibility that this passage might become true in your situation, and that your divided relationship might even become a living demonstration of the Good News of Jesus.

Ask Jesus if there is any way that He wants you to respond.

Before you read today’s Scripture, take two minutes to sit in silence, slow down your breathing, and become aware that the Spirit of God is with you in this moment.

Have you ever tried to plan a surprise party for a loved one?  There’s a lot that goes into it.  All kinds of pre-planning.  Phone calls and emails to share the details and invite the guests.  Preparing the venue.  Making food.  Decorating.  All this while trying to keep the plans under wraps from your loved one, so that, at just the right time, it can all be revealed in one joyful, “SURPRISE!!!!!”.  And when it is revealed, what a rush – shock, delight, joy, wonder, celebration, connection.  All in one moment, the person of the hour gets brought in on all the plans that you’ve been working on for many weeks.

In light of all that Paul has been writing about, he’s about to break out into an incredible prayer on behalf of his readers (more on that in a couple days).  But he cuts himself off first!  Because he wants to make sure they (and we) get it.  “Do you see what’s been going on?”, he says.  For ages, God has been planning the most incredible surprise party.  It’s been kept under wraps – though he’s been dropping hints all along through the prophets.  But the SURPRISE!! has finally arrived — in Jesus.  And now you – all of you – are welcome at God’s party.  It’s not just for a select few.  You’re ALL honoured guests.  More, welcomed as children and heirs of the King.  Part of the body of Christ.  Recipients of his great promises.

“None of us saw this coming,” Paul says.  But God had it in mind all along. 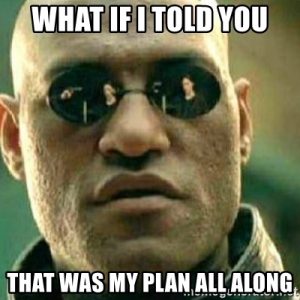 Take a moment and reflect on the fact that God was working toward this incredible plan for ages while most of His people never even realized it.

If that’s the case, imagine for a moment, how else might God be working out this plan in ways that you currently don’t see?  Who else might He be working to SURPRISE with Divine Welcome, even though they may currently be in the dark?  Take a few moments and allow the Spirit to capture your imagination with this.  Pray over what or who comes to mind.

Before you read today’s passage, take two minutes to sit in silence, slow down your breathing, and become aware that the Spirit of God is with you in this moment.

More than once, the readings this week have been driving home the point that the unity of the Church is one of the most powerful demonstrations and “sign-posts” to the Good News of Jesus.  We were disconnected, alienated, and even hostile toward one another.  But in Christ, God has reconciled us to one another, made us One, all part of the same family, all called in as brother and sisters.  And as incredible as this is, it points to an even greater miracle – that we were once disconnected, alienated, and hostile to God. But in Christ, God has reconciled us to Himself, brought us all into His family, called us His children, and given us a whole new inheritance.  The visible reality of the Church is meant to be a living demonstration of the invisible reality of Jesus’ reconciling grace.

That might sound a little strange for you.  But listen to how N.T. Wright describes it:

The ‘rulers and authorities’ – both the earthly authorities and their shadowy heavenly counterparts – always tend to create societies and social structures in their own flat, boring image, monochrome, uniform and one-dimensional. Worse: they tend to marginalize or kill people or groups who don’t fit their narrow band of acceptability. The church is to be, by the very fact of its existence, a warning to them that their time is up, and an announcement to the world that there is a different way to be human.

You see, the Church, by its very existence – in all of its colourful, rich, multi-faceted diversity – makes a statement so loud it reaches to the “heavens”.  As Paul said, “through the church, the manifold (i.e. colourful, rich, multifaceted) wisdom of God is made known to the rulers and authorities in the heavenly realms” (v. 10).  God’s ways and God’s wisdom cannot be matched.  No other power can compare!

Take a moment to reflect on the fact that the unity of the Church acts as a victorious trumpet blast into the heavenly realms.

Pray for the Church, universal.  And pray for our local church.  Ask God to work out His “manifold wisdom” amongst us, to lead us in victory over the evil one who seeks to divide and destroy, and to strengthen us to be a living demonstration of His wisdom and power.

Before you read today’s passage, take two minutes to sit in silence, slow down your breathing, and become aware that the Spirit of God is with you in this moment.

I don’t know how many times I’ve read this prayer and prayed this prayer – but it never gets old!!  It makes my heart leap with both gratitude and longing.  It makes me delight in the incredible love of God, and it makes me desire to know it so much more.

What if we prayed this prayer in light of all of that?!

Read this prayer again in light of everything else we’ve read in Ephesians this week (2:11-3:13).  Take a few moments to let the “manifold wisdom of God” described in this section sink into your heart as you read and receive this prayer from the Apostle Paul.

Now take a few moments and pray this prayer out over the Church – all of us.  Pray this prayer over any relationships that may be broken and need to be filled with more of the knowledge of the deep and high and wide and long love of God.  Pray that the power of God to do immeasurably more than all we could ask or imagine would fill His church, and be active in His church, and go out from His church to glorify Jesus and make much of Him in our world.